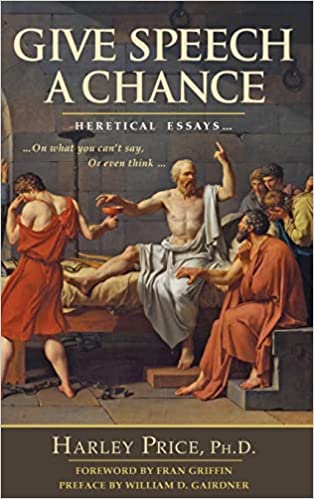 I write to announce the publication of my new book, Give Speech a Chance:  Heretical Essays on What You Can’t Say, or Even Think (326 pages; FGF Books, 2022), available from amazon.ca, amazon.com, and directly from the publisher, at fgfbooks.com.   Give Speech a Chance is a collection of 46 essays published in various journals over the past dozen years or so.  You may well have read some of them already, since many of the essays published in Give Speech a Chance were first posted here at Priceton.  Never mind.  Give Speech a Chance is a book:  i.e., an object of palpable, physical reality, as opposed to a collection of pixels.  While reading in general is now beyond the abilities of most university graduates, books in particular represent an endangered species.  You should buy mine for that reason alone.  Indeed, you should buy as many copies as you can afford.  Keep one for yourself, of course.  But give others as gifts to your conservative friends; or confer a copy upon a progressive acquaintance — I say “acquaintance” in the knowledge that progressives can’t abide being friends with conservatives — , just to test his commitment to “tolerance, diversity, and inclusion”, or merely to piss him off. 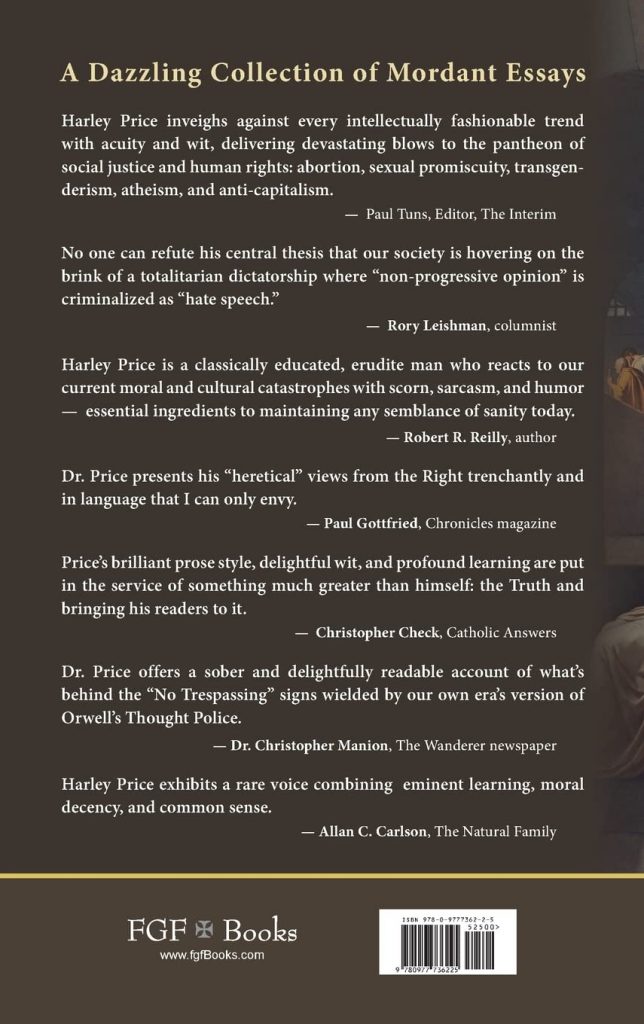 Give Speech a Chance is a handsome volume, if I do say so myself.  Its front cover and spine are adorned with a high-definition reproduction of Jacques-Louis David’s splendid eighteenth-century painting, The Death of Socrates.

In the foreground, Socrates is about to take, with his right hand, the poison cup of hemlock he has been compelled to drink by sentence of the Athenian State, while he points upward, to a higher authority, with the index finger of his left.  Socrates’ “crime” was to demur from the politically-correct religious, moral, and social orthodoxy in which the Athenians were then being indoctrinated by both their secular rulers and Athens’ civil priesthood — though by comparison to the progressive priesthood that now runs the government, the schools, mainstream media, Big Tech, and so on, Athenian censorship and cancel-culture were pitiful things.  In any case, what Socrates assuredly is saying (or at least thinking) in Jacques-Louis David’s painting is, Give Speech a Chance.

I won’t attempt to describe the contents or argument of my book; as I said in a recent talk I gave in Virginia (see the previous post on Priceton), “If ever you want to see someone reduced to stammering, blithering, panic-stricken inarticulateness — Joe Biden level inarticulateness — just ask him to tell you what his book is about.”  (This is an affliction that all writers suffer, by the way, no matter how august.   It is said that shortly after the publication of The Spirit of Medieval Philosophy in 1932, Etienne Gilson was asked by a graduate student what his magnum opus was about, whereupon the world’s most eminent Thomist turned pale.  Following a few aborted sentences, he finally blurted out, in exasperated defeat:  “It’s about the spirit of medieval philosophy, dammit” — though it must have sounded somewhat more refined in the original French.)

For the reader who likes to kick a book’s tires before purchasing it, the Preface by William Gairdner and the Contents are reproduced below: 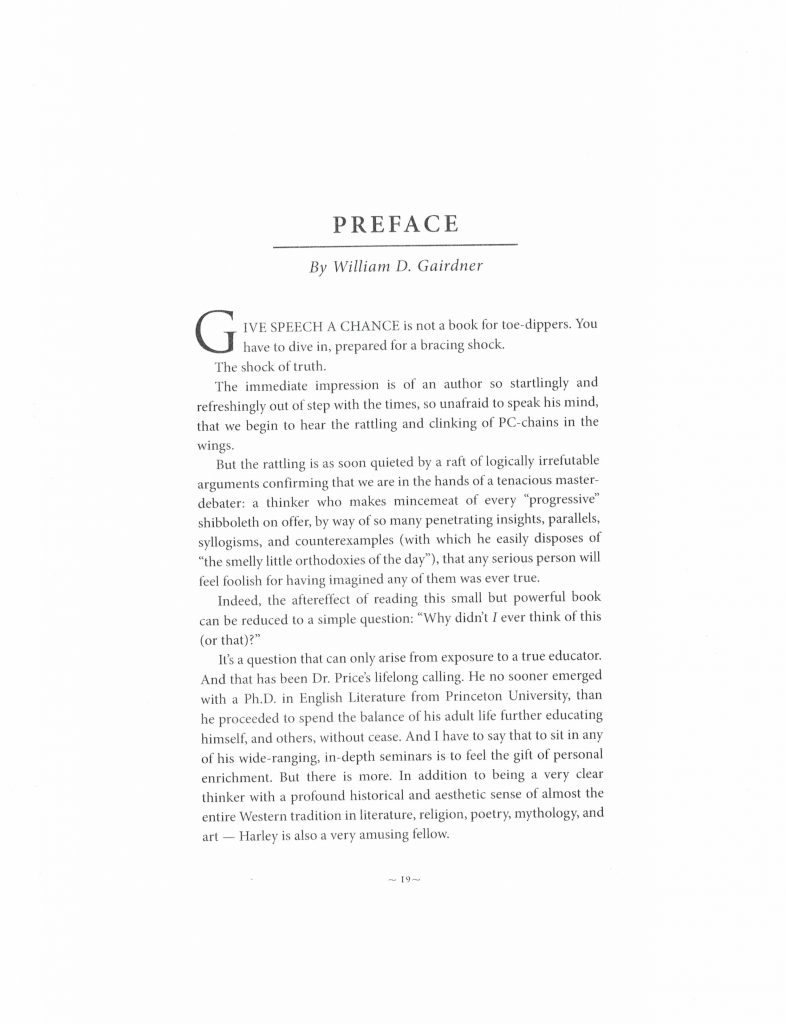 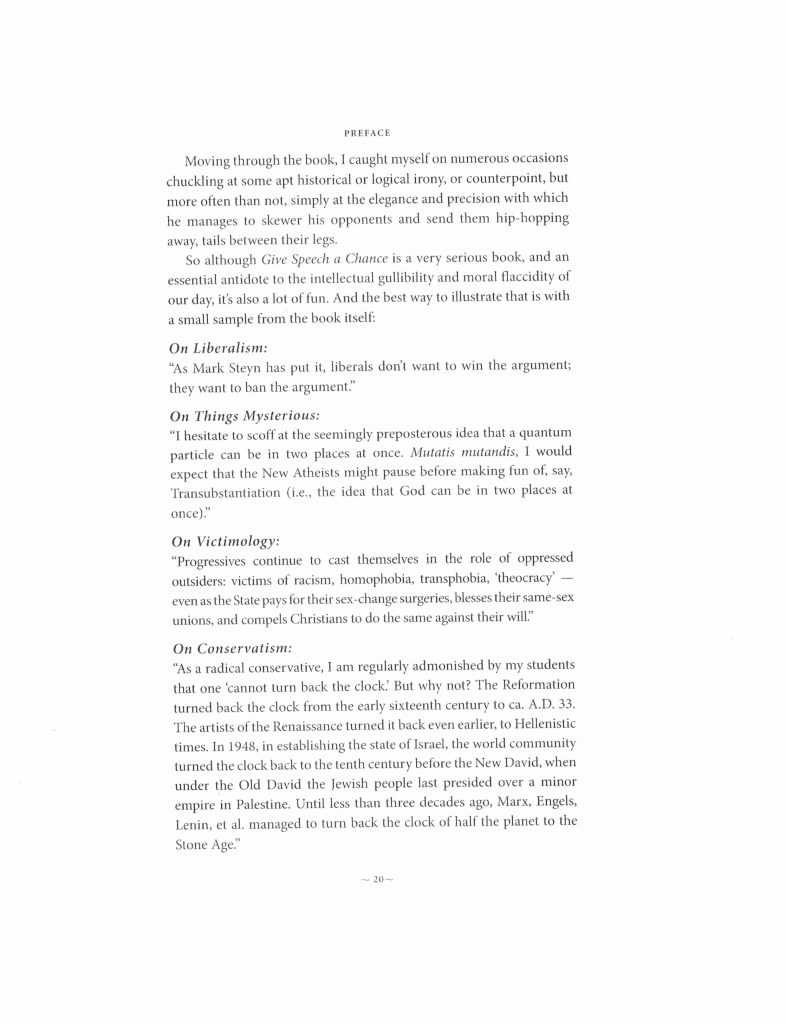 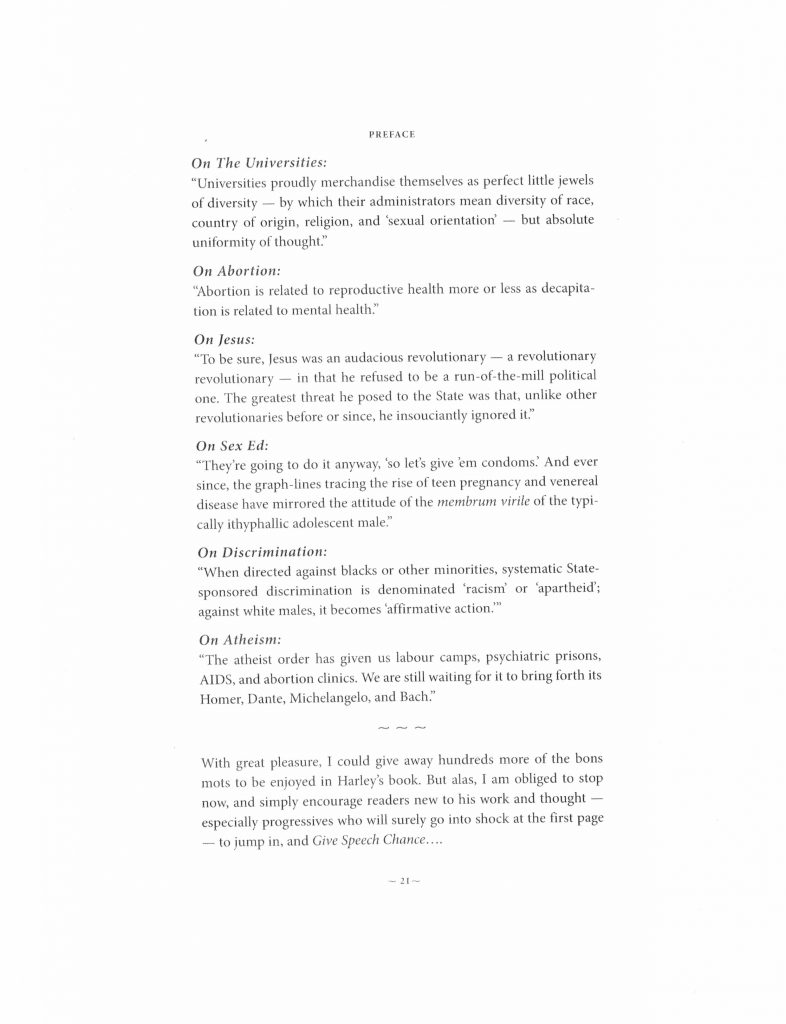 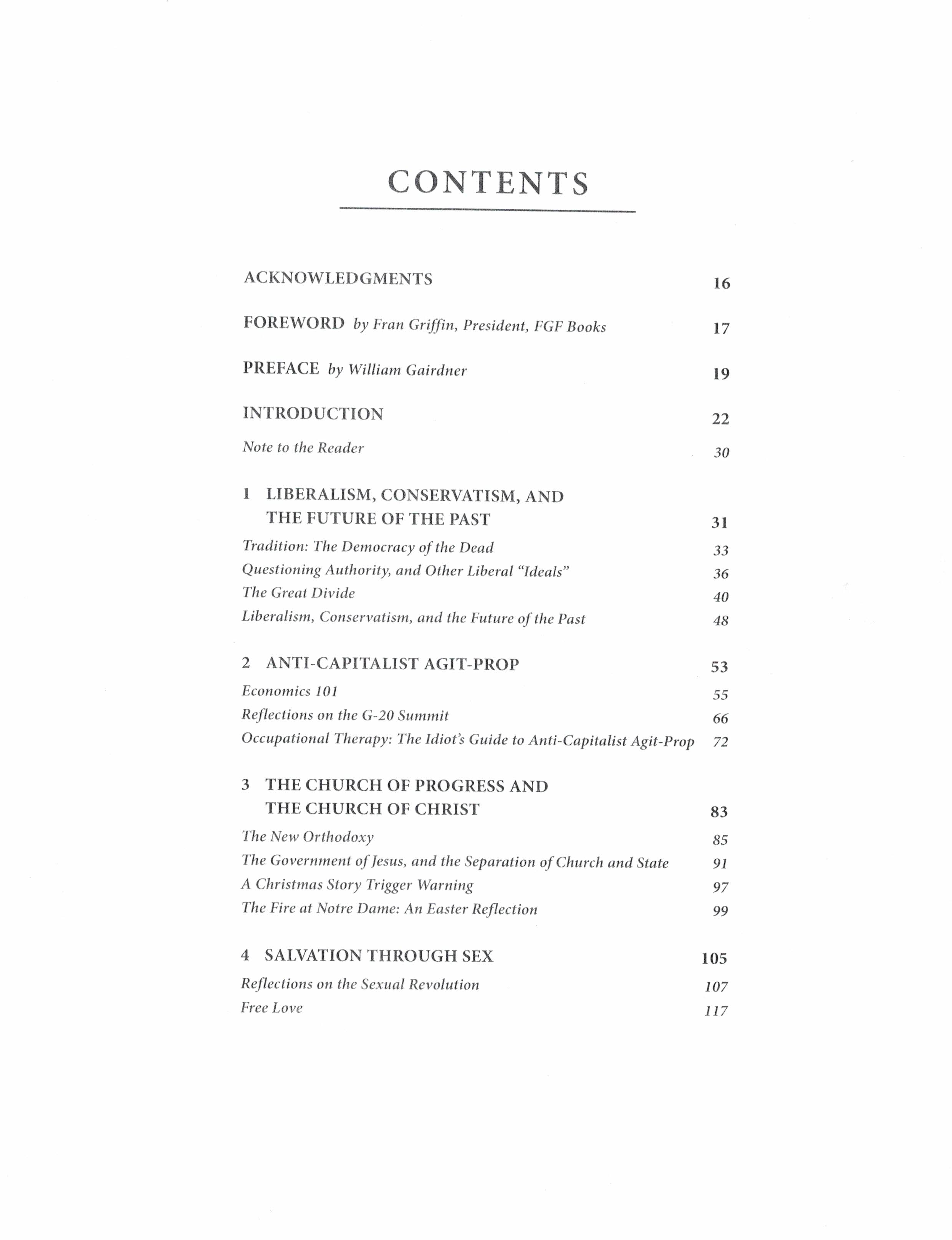 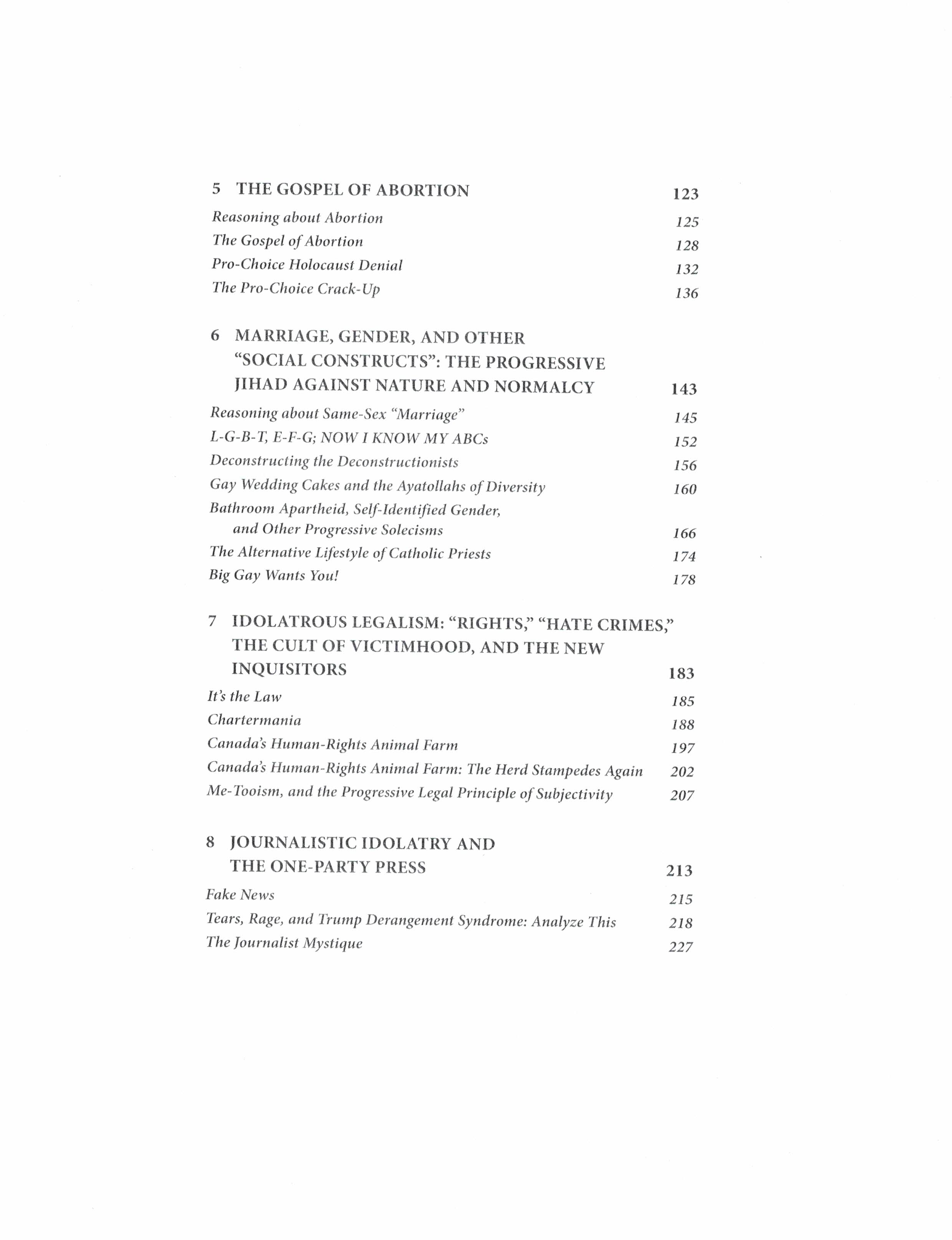 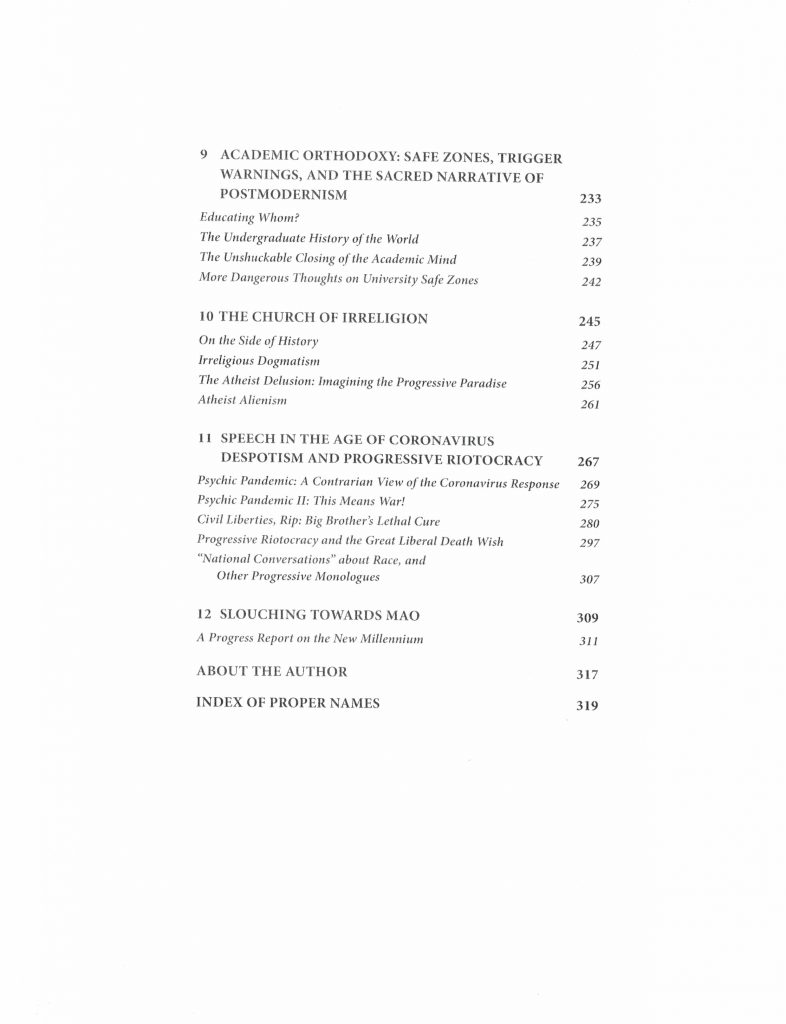 While the comparison between Socrates and the present writer must end (except for the bald pate and flabby pectorals — see David’s painting), Give Speech a Chance has received abundant and generous praise from eminent conservative thinkers and other dissidents from progressive orthodoxy. I include here a link to the “Advance Praise” that appears in the opening pages of the book.  Paul Gottfried’s review  in the August 2022 issue of Chronicles Magazine is linked here, and Paul Tun’s review in the September 2022 issue of The Interim here.

Essays on the Smelly Little Orthodoxies of the Day

~We Introduce Ourselves~
~Youth and Age~
~Educating Whom?~
~Liberalism, Conservatism, and the Future of the Past~
~The Undergraduate History of the World~
~The Absolute Certitude of Modern Relativists~

~Slouching Towards Mao~
~Fake News From Long Ago~
~Fake News~
~The Christmas Story, 2116~
~More Dangerous Thoughts on University Safe Zones~
~England for the English~
~Bathroom Apartheid, Self-Identified Gender, and Other Progressive Solecisms~
~The Unshuckable Closing of the Academic Mind~
~Patronage, the Arts, and Cut-Throat Begging~
~Gay Wedding Cakes and the Ayatollahs of Diversity~
~The Great Divide~
~Deconstructing the Deconstructionists~
~L-G-B-T, E-F-G, Now I Know My ABC's~

Paradise, Purgatory, and Hell: A Dantesque Journey through Northern Italy

The Atheist Delusion: How the Religion of Progressive Thinking Poisons Everything; or, Reasoning with Dawkins and Hitchens

~Reflections on the G-20 Summit~
~The Alternative Lifestyle of Catholic Priests~
~Canada's Human Rights Animal Farm: The Herd Stampedes Again~
~The Gospel of Abortion~
~Canada's Human Rights Animal Farm~
~The Fall of the Wall; The Fall of Tiger; and the Hypocrite's Dilemma~
~The King of Pop, Ryan Jenkins, and the End of Civilization~
~Tradition: The Democracy of the Dead~
~A Modest Proposal to the Students at York~
~Salve, Obama, Rex Misericordiae~
~Economics 101~
~Solzhenitsyn, R.I.P.~
~Oh Canada in Beijing~
~Signs of the Times~
~The New Orthodoxy~
~The Peace Movement Revives~
~Reasoning about Same-Sex Marriage~
~O Tempora, O Mores!~

~Priceton University~
~Education and the Visio Dei~
~Myth and History~

The Vocabulary of Myth: Cosmogony and Cosmology

Involuted Mysteries, II: A Grammar of Symbols and Ideas. Some Perennial Themes, Image-complexes, Mythic Archetypes, and Philosophical Topoi in Literature and Art before 1800

Involuted Mysteries: Unwrapping Meanings in Literature, Theory, and Art before 1800. The Symbolism of Numbers, and Their Associated Topoi

In Lucem Gentium: Anecdotal Reflections on Growing Up and Out of the Jewish Ghetto

~A Mythological Approach to Christian History and Soteriology~